Lost And Found In Translation

Konnichwa! So I am not long back from my holiday in Japan and still readjusting from my whirlwind trip. This was a whistle stop tour around Central Honsu, with not nearly enough time to see all the endless sights, but I still did a lot! There is so much to do in Japan it can be exhausting but equally enlightening. Of course I did take a couple of cameras with me, which was not always easy especially when climbing up hills and mountains.

Everywhere I visited in Japan engaged all my senses so intensely its quite hard to capture the sensations, smells, sounds, people etc. I know it may be a cliche to say but Japan is a complete contrast, so steeped in tradition yet so modern. I remember one rainy day in Kyoto going to a local shopping arcade, hearing ‘When I’m 64’ belting from the overhead cover whilst a bunch of goth kids were playing on manga style arcade games a heady waft of incense from a near by temple engulfing me. Whats going on! It’s confusing, but keeps you in a permanent state of surprise and awe.

Here are just a few pictures from my trip (I don’t want to bore you) so you get the idea and hopefully a sense of the country. I still have lots of film being developed, but that’s for another time.

If you ever get the chance go to Japan, there is no where else like it! 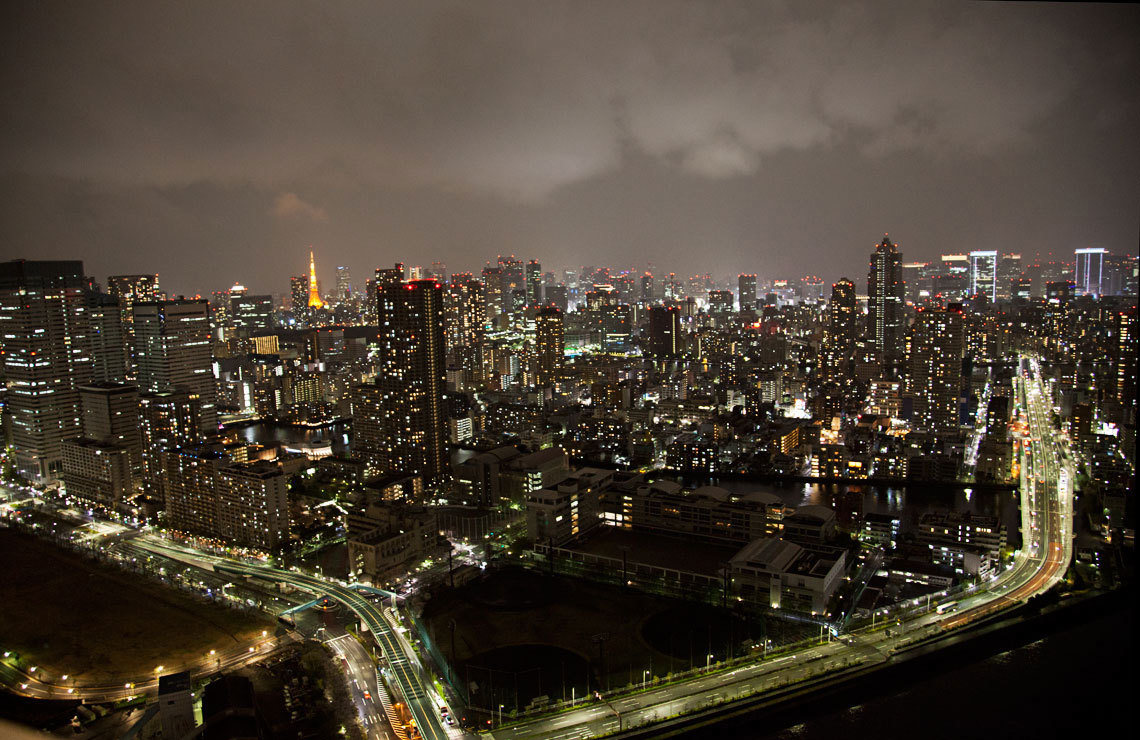 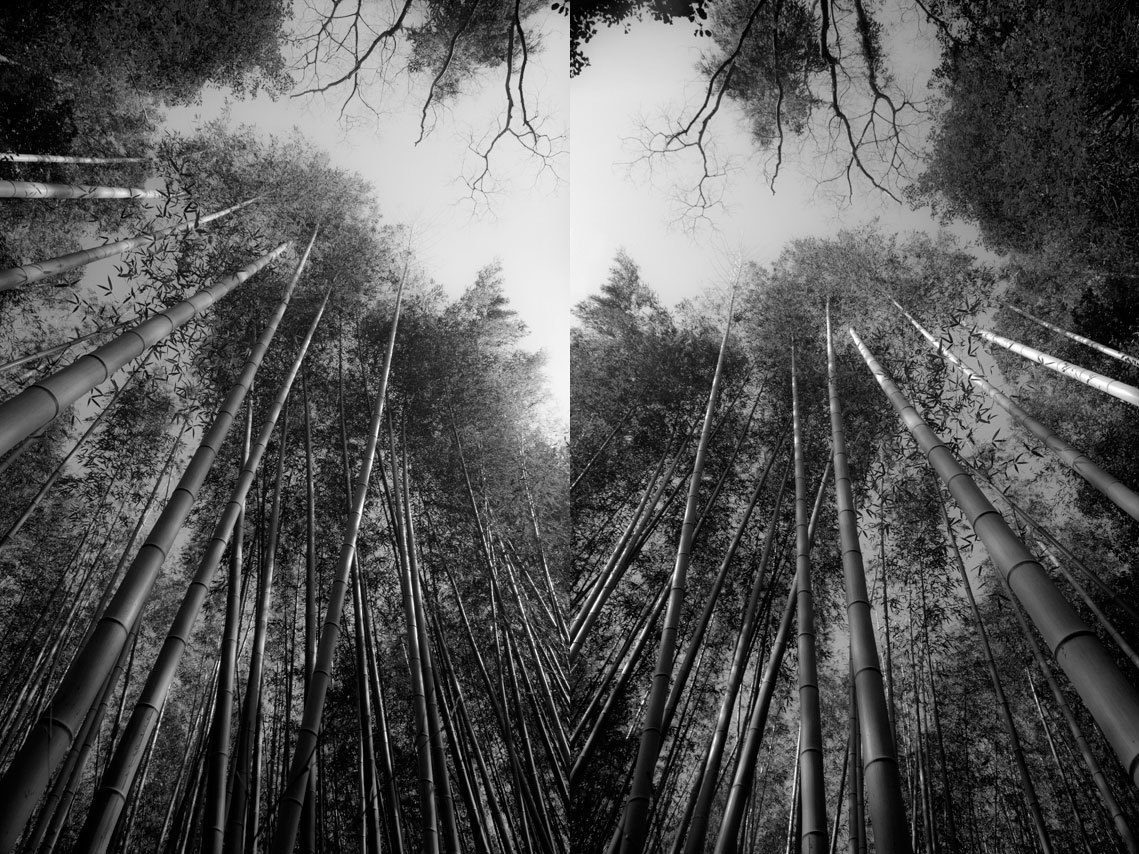 Twin shots of bamboo grove in the Arashiyama area of Kyoto and a shot from the top of the building I stayed in Tokyo. This is one of the first fully earthquake proof buildings in Toyosu. Moments earlier the building set of an earthquake alarm and I was up here in gale force winds and sideways rain! The sky is so bright from the lightening behind the clouds… scary but certainly woke me up! 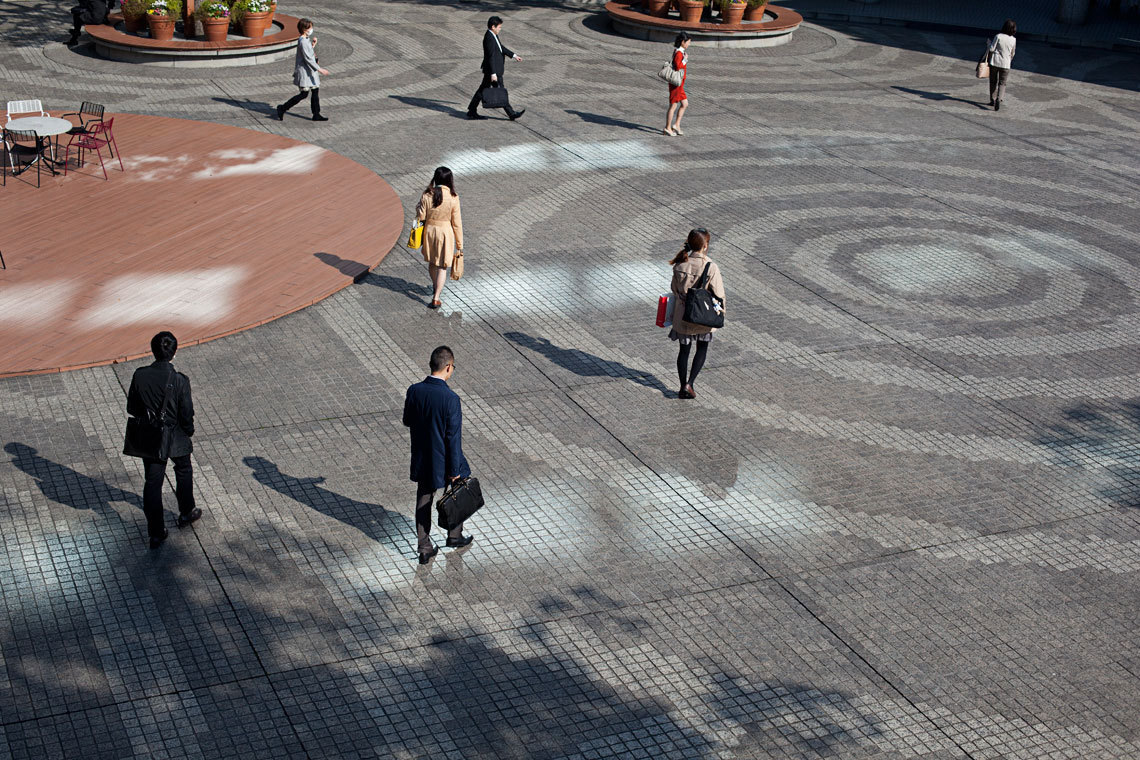 People start the journey to work in Toyosu, this is relatively quite as rush hour in Japan in insane.. much busier than London if you can imagine. Despite this there is a uniformed calm and everyone is polite. 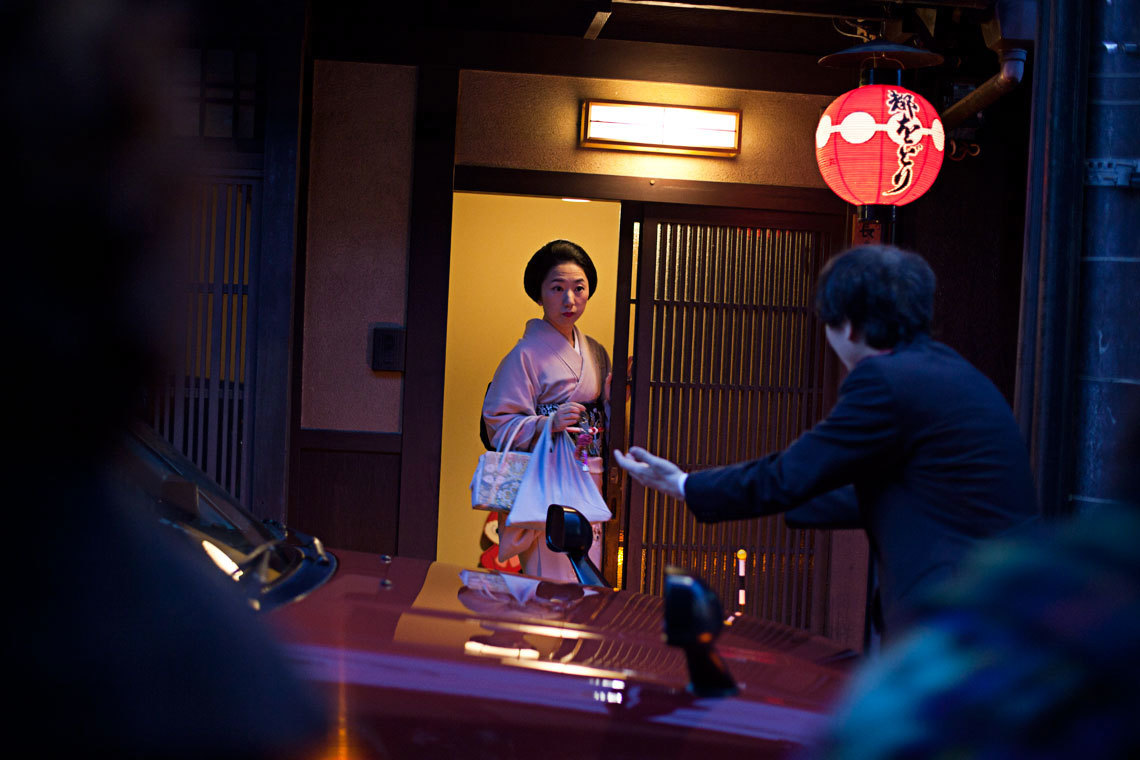 Taxi driver is greeted by a house runner as he awaits a Geisha girl. Gion, Kyoto.

Illusive Geisha girls hurry past into their taxi’s, keeping their head down. Gion, Kyoto.

The endless shrine gates at Fushimi-Inari Taisha illuminated by morning light, Kyoto. Man stands in front of a shrine performing ‘the burning of the dolls’ to set the spirits free, Ginza, Tokyo. 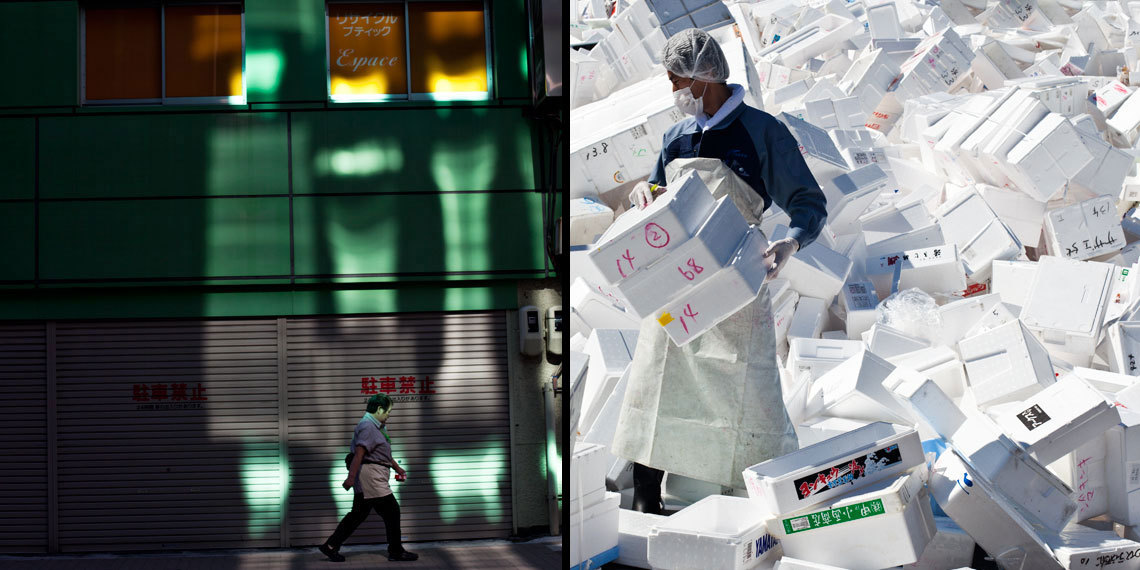 After the madness has ended at the worlds biggest fish market, endless mountains of polystyrene needs to be cleared. Tsukiji Fish Market, Tokyo.

A Snow monkey chows down whilst sat in an Onsen, Yudanaka. A young girl is dressed up for Shichi-Go-San, whilst stood in front of one of the first cherry blossoms. Gion, Kyoto. 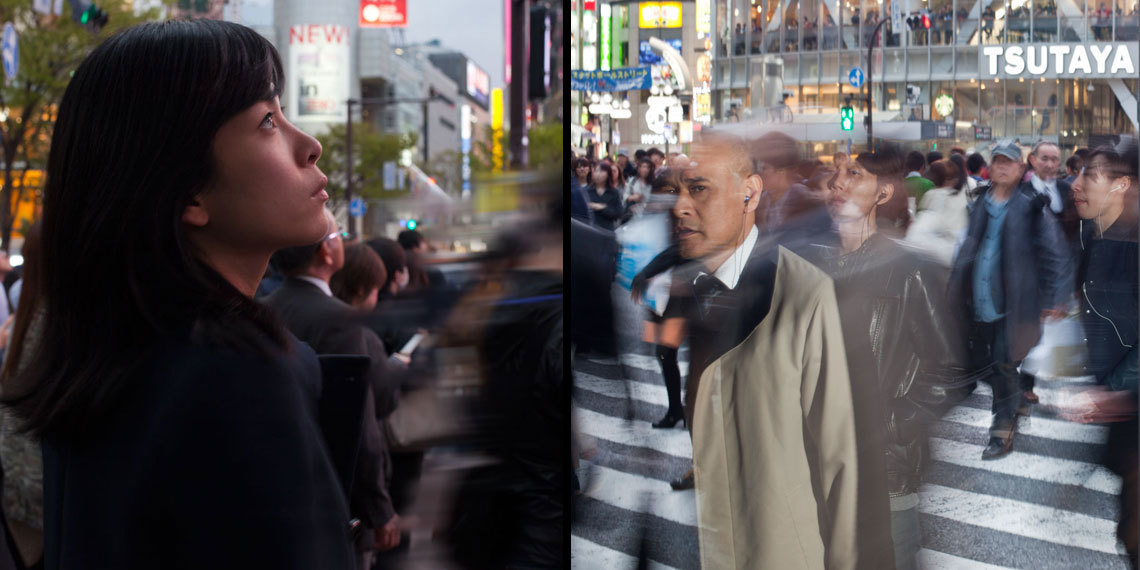 I stood mesmerized by the endless swarm of people at the infamous crossing at Shibuya. This spot has featured in many films and there were a few film makers stood around looking as overwhelmed as me. Shibuya station, Tokyo.

Most of my trip was spent halfway up a mountain getting totally Zen with my surroundings. There are many temples and shrines in Kyoto, each one more beautiful than the next.

Cosplay girls strutting their stuff in Harajuku, Tokyo. Cosplay is a bonkers fashion trend with devout followers. The main categories seem to be either Goth, or little Bo Peep on acid!

My worst nightmare food, Octopus! Guys walking around a market in Ueno, which reminds me a little of a Japanese Brixton. Ueno, Tokyo.

Prayer sellers seem to mirror each other at a temple in Kyoto. A girl stands by a poster in Shinjuku, Tokyo. 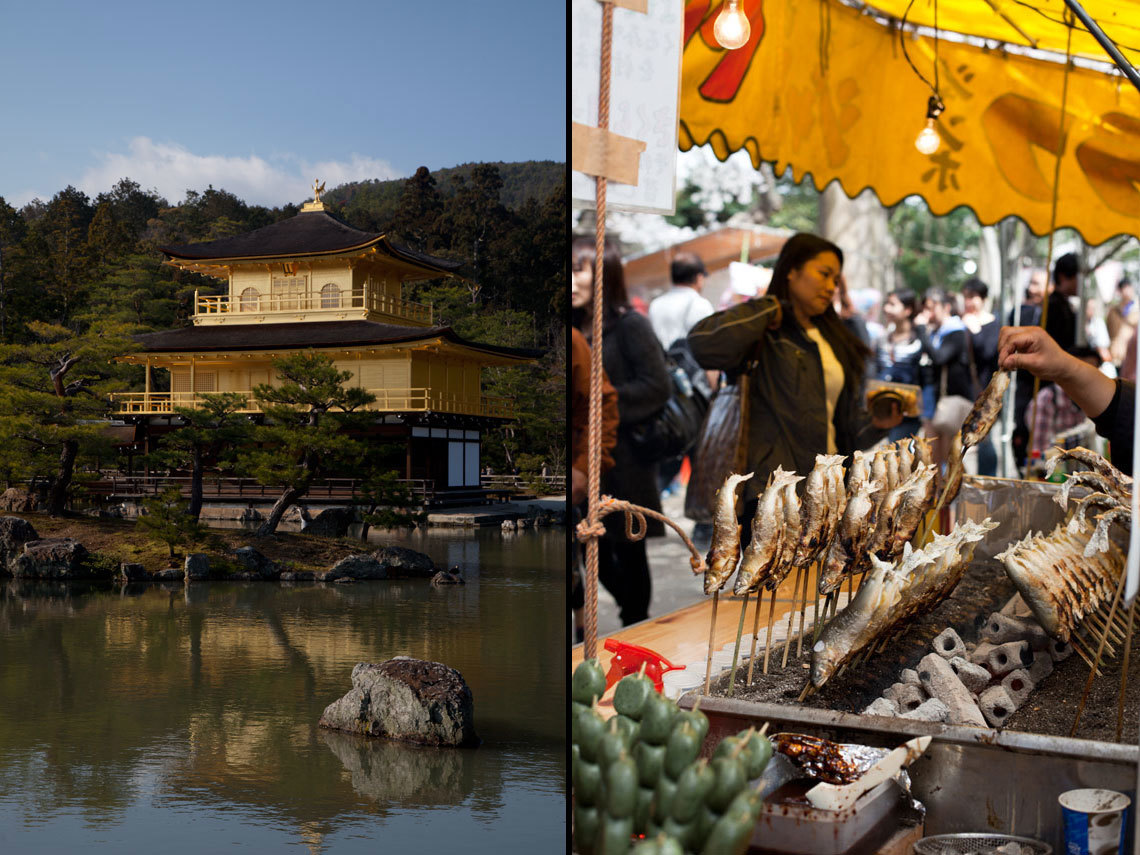 The first day of celebrations for the Cherry blossom festival, lasting just one week, people go absolutely nuts for this, taking time of work and finding a spot under a blossom tree from the early hours of the morn. Ueno Park, Tokyo.

Musicians wear traditional ‘basket heads’ whilst they lead a parade followed by a dressed up child for the Cherry Blossom Celebrations. Ueno Park, Tokyo.

Cutest kitten ever for sale in the many pet shops in Tokyo. The nicest man ever cooks me lunch, played me his trumpet (he liked funk) then made me a bad of sandwiches for my journey! Nara.

Me looking slightly rattled and maybe a bit exhausted in Tokyo. Man out on the town in Shibuya, Tokyo. SAYONARA KIDS!!! More to come…..